How is enamelware made

Today, enamelware is experiencing its renaissance.

Our manufacturing technique is traditional – we preserve methods of production that are over 100 years old.

Enamel is a material produced by fusing powdered glass to a substrate. It is fired with additive pigments. Covering steel elements with enamel protects the base material from rust, gives the ware a pleasing aesthetic, and guarantees health and safety when enamelware is used in the kitchen. Its durability is the result of firing at high temperatures (about 850°C) This not only makes it durable, but also makes it suitable for use on any cooker (including induction hobs) and makes it dishwasher-safe.

Enamelware is one of the most durable

kinds of kitchenware like mugs, tumblers, bowls etc. that are currently available.

Do you know why you can safely put one kind of enamelware in the bonfire, but not others? Have you ever wondered about the difference, since all enamel mugs look almost the same? Certain production methods are the key here. At Emalco, we make mugs that are made of the best quality steel and we use ceramic decals which are fired into the last layer of enamel – all of that makes them heavy-duty enamelware!

Wanna see how cheap enamel mugs will look after you’ll use them in an open fire? 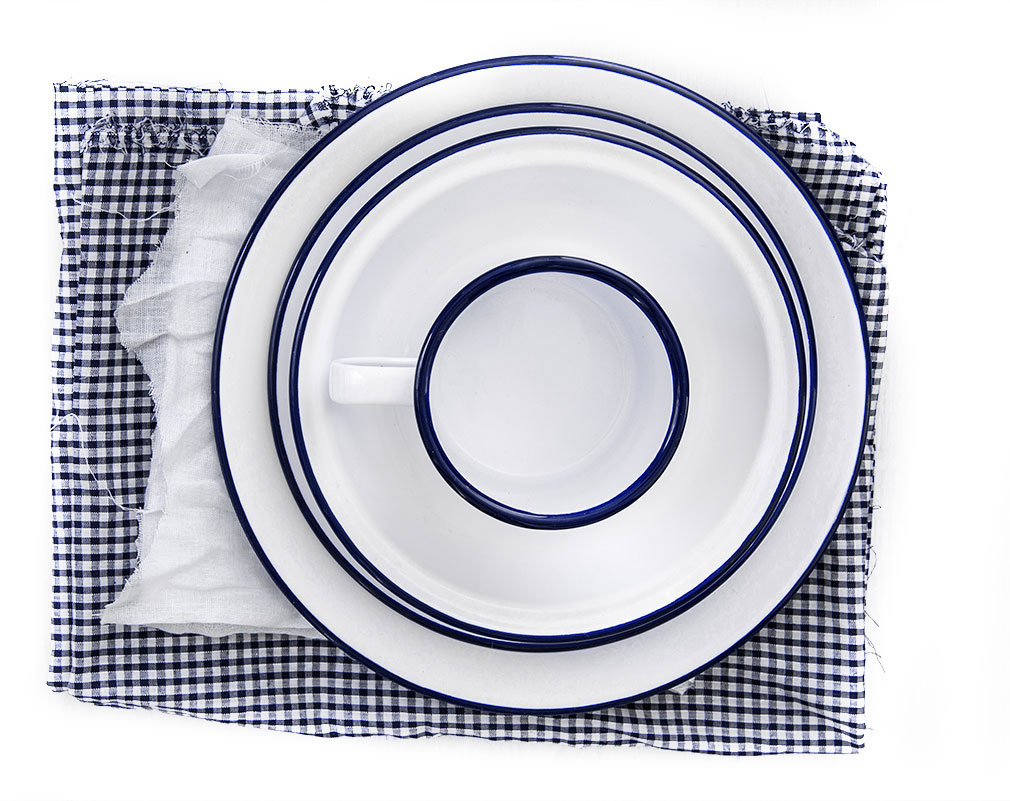 The process is divided into two main stages:

Firstly the sheet metal is cut into separate rings. It is then pressed at high pressure to form the body of the dish. The metal parts such as the handles or rims are then taken and welded together to complete the metal form…

Enameling the metal form
This stage has a few more tasks:

This is where the material is coated with a base coat to prepare it for the outer layer. Following this the product is inspected by our quality control team. If it passes this stage, it can then be fired at very high temperatures. It is inspected once more after firing to ensure no defects have occurred.

The second part of enameling is where your design really comes to life! This is where the dish gets some color. This gives the product its required aesthetic and practical attributes. Should the inner and outer colors of the product differ, we firstly apply the inner coat. After drying, we apply a special enamel to the rim. It is specifically made to protect this area and needs to be especially durable. The product is then fired once more, before another rigorous inspection (we want to ensure all high standards of production are met).

After all of this, we can begin to decorate the product. Decoration is also a time-consuming process. At first the ceramic decal is applied by hands. Then it has to be dried and fired at very high temperatures (once again!) before, of course…. Yes – you guessed it! It is inspected again!

The history that will be written on your enamelware can enrich it or damage it – it all depends on how it is treated.
Here are some rules to help you save it for years to come and some advice to make you and your enamelware friends.

The history of enamel

The history of enamel starts as far back as over 5 thousand years ago. Ancient civilizations used enamel to cover their earthenware and jewelry. The form of enamelware that is currently used, and that we all know, dates back to 1760 in Germany. From there, it spread to other European countries, including Poland. Enamel officially arrived in North America in the 1950s. In early enamelware production, it was only the internal parts that were enameled; this was done to eliminate any contact between food or beverages and the steel substrate, to minimize the chance of contamination from rusting metal. Later, people began to realize the benefits of enameling the exterior, as it proved durable, easy to clean and resistant to interaction with food steel ware. There were some regional preferences as to the decorations. In the USA, plain enamel was the style of choice, closely followed by speckles. In the UK, the white enamel with a navy blue brim was dominant. In contrast, Sweden’s most popular design was cream with a green frame. Other countries frequently used speckles, spots and folk decorations.

– every product of Emalco Enamelware is handmade and every
imperfection creates uniqueness.

Do you have any questions? Check our Q&A or contact us!

This site uses cookies to provide level-level services. By continuing to use the pages, you agree to their use. To get ready more click here.